The fundamentals of Facebook advertising is based on an “Auction Model”. What this means is that you are essentially competing with other people that are advertising on Facebook (also known as “Advertisers”), and the highest bid wins.

So the short answer is that the cost of advertising on Facebook really depends on many different factors. There’s no single fixed cost figure that you can accurately benchmark with.

Generally, Facebook charges its ads on a CPM basis (cost per 1000 impressions). Let’s take a $4 CPM as an example. What this is saying is that you are paying Facebook $4 to reach out to 1000 people.

The important distinction to be made here is the difference between the cost VS spend of Facebook advertising.

Cost: The amount that you are getting charged for the ads (cost per 1000 impressions). This is determined by Facebook.

Spend: The amount that you are willing to pay for the ads (daily spend). This is determined by you in the ads manager.

Let’s take for example that you have $5 per day to buy Apples. This is your spend, which is the total amount that you are willing to fork out to buy apples.

Example 1: On Monday, there are many people buying apples. Because of this, the fruit store charges you $1 per apple. Therefore with $5, you are only able to buy 5 apples.

Example 2: On Tuesday, there are lesser people buying apples. Because of this, the fruit store charges you $0.5 per apple. Therefore with $5, you are able to buy 10 apples.

Let’s translate the example of the apple back to Facebook advertising. You are able to set your spend per day ($5) and Facebook will deliver to you the cost ($0.5 per apple) based on the competition of ads on that day.

So with $5 per day of spend, your ads delivered to a certain amount of people based on the competition on that day.

You are definitely able to set your cost on Facebook (let’s say that you are only willing to pay $0.2 per apple). Facebook will take your cost and put that figure into its Auction Model.

If your selected cost is too low (hence losing out on the auction), then Facebook will not deliver your ads on its platform at all.

When you are first starting out on Facebook marketing, it’s highly recommended to let Facebook determine your cost automatically, while you set a strict daily budget on your marketing spend.

Sadly, Facebook ads are not free. To run ads on Facebook, you need to spend money on the ads to reach out to users on the Facebook platform.

The good news is that you are able to start Facebook marketing with just $1 SGD per day! That’s the minimum that Facebook requires to run ads if your chosen currency is SGD.

For other countries currencies, the minimum is $0.5 per day. 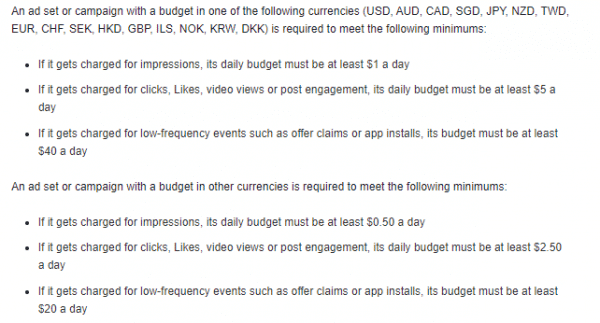 In short, you have to pay for Facebook ads.

But do take note that the minimum that you need to spend for a sponsored post is $1 per day (on a CPM basis).

There must be a reason why so many people are marketing on Facebook.

Take a look at all of the brands and businesses that are doing Facebook advertising: https://www.facebook.com/ads/library/?active_status=all&ad_type=political_and_issue_ads&country=SG

There are quite a few factors that will influence your Facebook advertising costs. Here are the most common factors:

From the Facebook advertising platform, you are able to select where you want your ads to be shown. There are 4 main channels which you can choose: 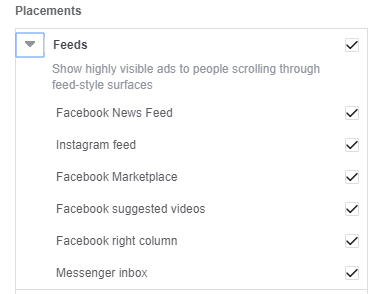 According to an industry report published by Adstage, the average CPMs for Facebook & Instagram channels for Q1 2019 are:

There are 11 different objectives when you are running Facebook ads. These objectives are: 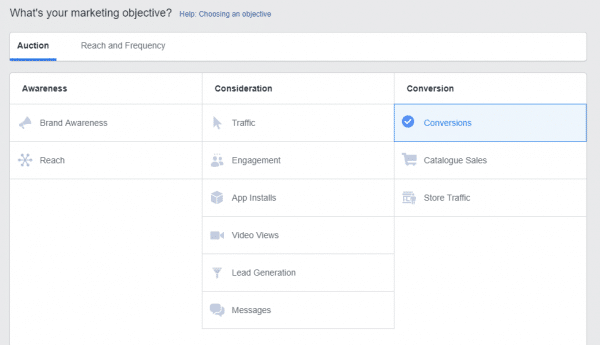 Naturally, the Catalogue Sales objective is a more valuable action as compared to an Engagement Objective. As you are asking the users to make a purchase on your website.

This shouldn’t come as a surprise, but different countries will have different Facebook advertising costs. 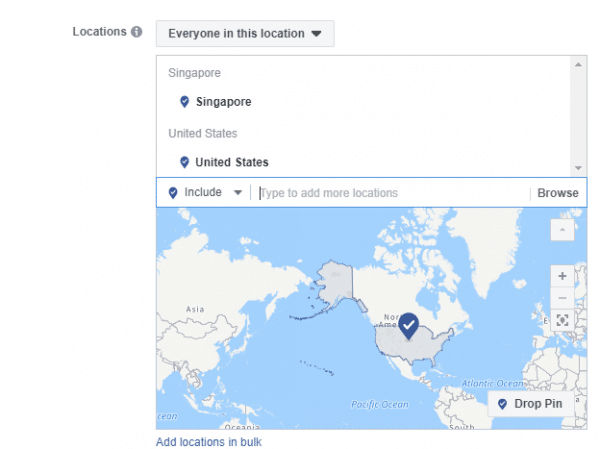 But before you are thinking of running ads to take advantage of the lower cost in the cheaper countries, take a step back and consider if it makes sense for your business to advertise to these countries. For example, if you are a plumbing contractor based in Singapore, you can only service clients within Singapore. Hence, advertising to other countries (apart from Singapore) is not something that you should be doing.

The time in which you run your ads also affects the cost of Facebook advertising. Historically, Q4 of the year is usually the most expensive period to be running ads. This is because users are in a “holiday mood” and hence they are more willing to spend. Competition increases dramatically during Q4 and this results in higher advertising costs.

Likewise, seasonality affects the cost of Facebook advertising too. We have seen costs rising 3-4 weeks before major events such as:

Remember that the cost to advertise on Facebook is always based on competition. The more advertisers you have, the more expensive the costs will be.

The relevancy of the ads also matters. As an example, if you are running an ad targeting people that has an interest in Yoga, and your ads are also promoting Yoga, this means that your ad is highly relevant.

The inverse could happen whereby if you are running an ad targeting people that like Yoga, but your ad is about rock climbing. This implies that your ad is not relevant to the audience that you are trying to reach.

Here’s the official statement by Facebook on Ad Relevancy: “Put simply, the higher an ad’s relevance score is, the less it will cost to be delivered. This is because our ad delivery system is designed to show the right content to the right people, and a high relevance score is seen by the system as a positive signal.“ 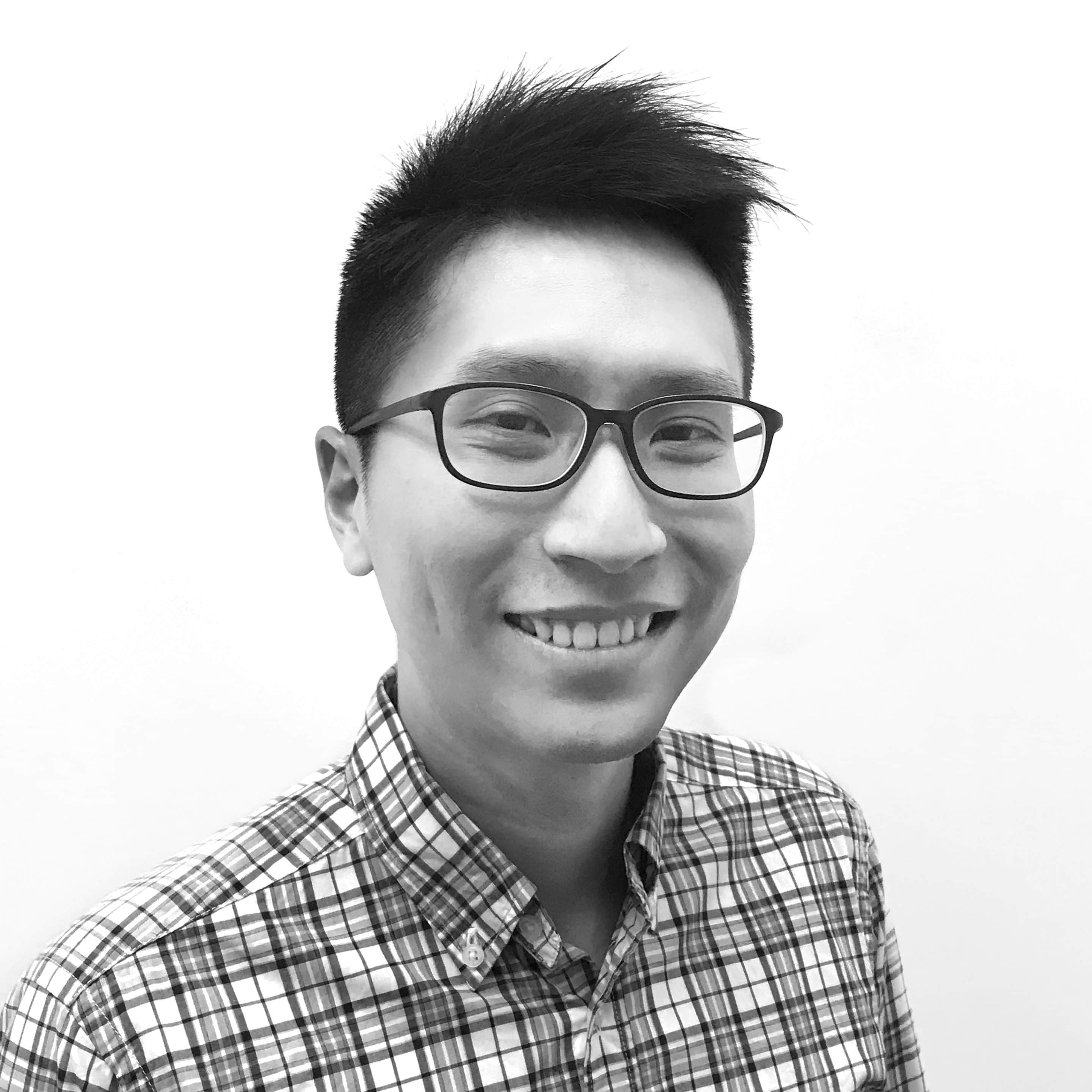 John is the co-founder of Secret Hideout, a creative marketing agency. As a digital marketer, he is obsessed about with driving impactful results for businesses via the different advertising channels.

Want to join the discussion?
Feel free to contribute!

Take away actionable digital marketing strategies and get certified.

Send this to a friend